A beautiful morning in the temple city of Bagan, the scheduled visit to the Nan Kaba Pagoda – VIII – near Myin Kaba village turned out to be much more than we had planned for. Once there, our curiosity was aroused by incongruously loud music.

Nonplussed, our guide was quick to explain that it should be the Shin Pyu, the festival of the novices because it’s the season. Our confusion didn’t last, dispelled by the following flood of information…we were in a village celebrating the most important event in the life of a Burmese: his entry to a monastery. As not everyone can partake in the noble endeavor of the minority wishing to become a monk, there is a way to experience the latter lifestyle: every male should stay in a Buddhist monastery as a novice monk for a certain period of time whether for a week, a month, three months or more, and his noviciate brings blessings to his family.

This important event is celebrated with a big party, the Shin Pyu. Our guide pointed out that we were lucky to be visiting during this month and witness the celebrations as February, March and April are the post- harvest, Shin Pyu season : the funds earned from the sale of the rice subsidize the costly ceremony. Sometimes, many parents- the case today – join efforts to finance their children’s pre-noviciate celebrations. 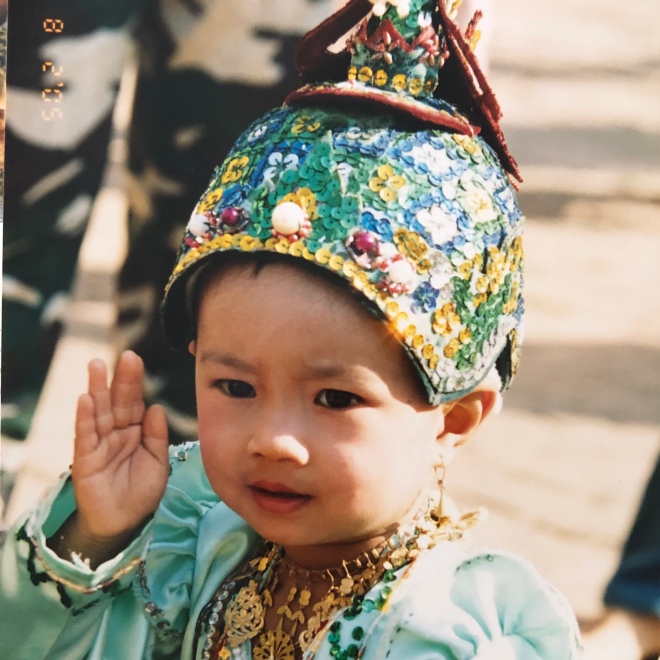 With this acquired knowledge, we watched with great interest the adults clad in a kaleidoscope of colours and a plethora of textiles, mostly silk, parading in front of us in two parallel rows.They appeared to be the parents, carrying in front of them the noviciat’s belongings, 8 necessary objects : an alms bowl, a razor, a fan, an umbrella, a sewing needle, and the 3 items of clothing that make up the monk’s outfit.

The adults were followed by the novices dressed like young princes in rich colours, with a paper crown on their head. 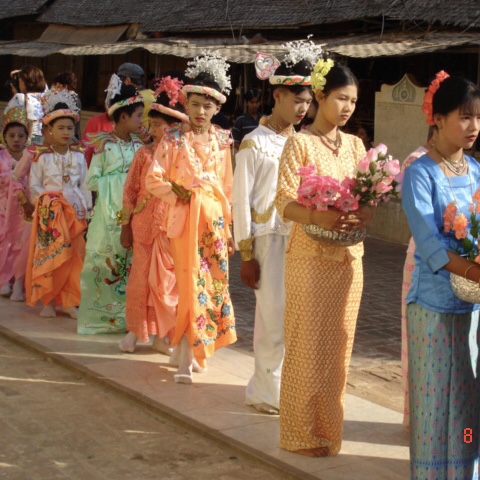 After a rushed photoshoot, we followed our interrupted program, and entered half heartedly the overlooked temple .

However, as soon as we exited the pagoda, we were reunited with the stars du jour, now each one of them riding a beautifully decorated horse and accompanied by an umbrella-holding attendant to shield him from the sun. 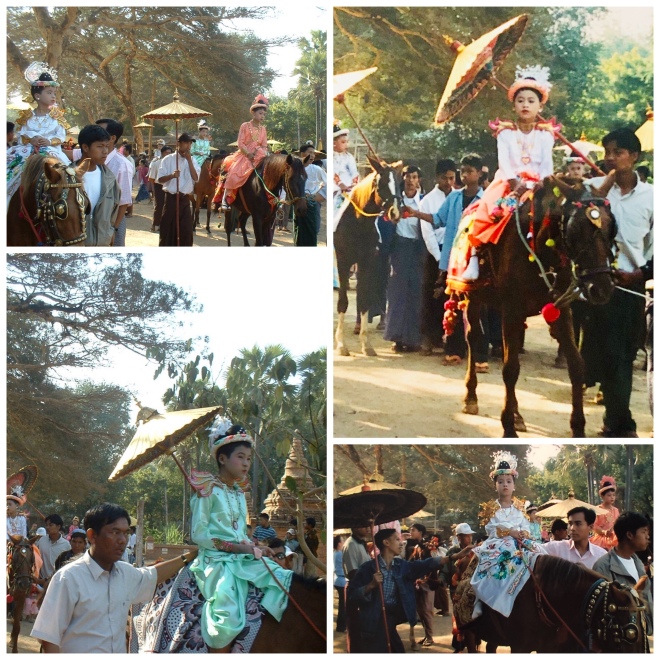 Some families followed on foot, others on decorated oxen carts.

A déjà vu situation: we left them reluctantly in order to resume the scheduled visits and trusted our guide to take us back later to watch the ceremony.

Eventually, much later, towards the end of the day, we made it to the party in full swing. Guided by the loud music, we reached the pandal, an erected shelter where dancing and singing were taking place. We were the only “party crashers “ i.e. non Burmese spectators, however people made place for us. We watched with great interest the novices being blessed by a holy man, observed him performing the rituals that followed. Later on, we joined in the fun, enjoyed the party, and cheered the 2 entertainers who alternated their parts on the stage.

We left before the novices got their heads shaved, and wondering will it be here or in the monastery?