Today, reading that Japan revealed the name of its new imperial era in line with the new emperor’s reign took me back in time to 2001 when I was crowned empress in Vietnam .

It was in Huế – ancient capital and UNESCO World Heritage site – and our tour guide Huu had planned a royal dinner experience in a historic residential palace for our group of twelve ladies. Before the pickup time, he recommended we dress light to avoid feeling hot as we were to add another layer upon arrival : a traditional costume. His advice provoked one friend to wonder loudly: “Can we wear our swimsuits?”- light, isn’t it ?! Unbaffled, Huu replied : “The name of the agency I work for is Exotissimo, not Erotissimo. “

So that evening, on our way to dinner, Huu asked us to choose two people to dress as emperor and empress, the others will be mandarins. While one friend requested to carry the male crown, the female one  landed on my head:a friend kindly suggested to bequeath the coveted title to my humble self , the baby of the group – her words not mine…

For me, that was a battle won without arms

Excitedly, we all wore our outfits and proudly headed towards the old palace with great fanfare, accompanied by two people holding an umbrella each for our highnesses. 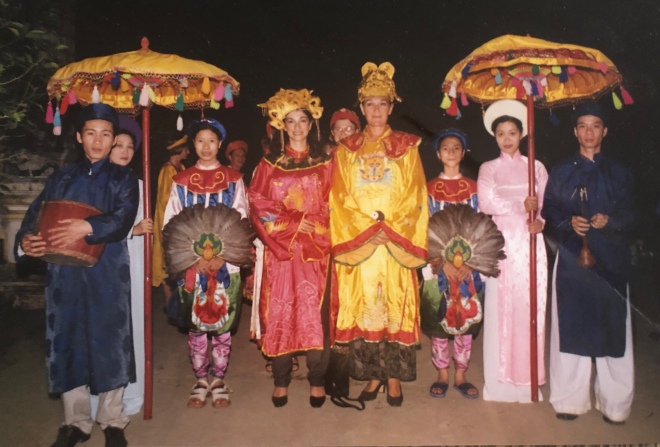 We had a private room for ourselves and the culinary experience was heavenly. Needless to say all of us, mandarins and royals delighted in the authentic Huế dishes that were once the prerogatives of royalties of the Nguyễn Dynasty. However few details set the royal couple apart:

-our table was higher than the mandarins’. The latter were divided on two long tables of five facing each other, one on our right and one on the left.

-In front of us, a band was playing traditional music🎶 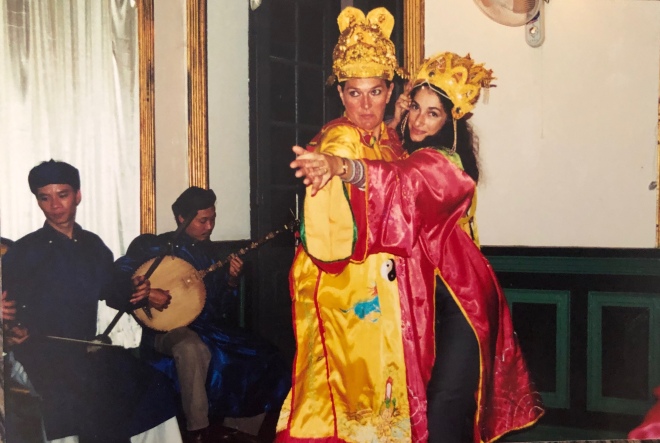 -Our dishes were ostentatiously decorated

PS: We had so much fun with bouts of loud laughters that two Frenchmen – not wearing the “vietnamese court attire” – came knocking on our door. They were with a group of tourists visiting from France; drawn by the noise, they came to inquire about the reason we were having more fun than their crew..and we explained jokingly : husbands were miles away 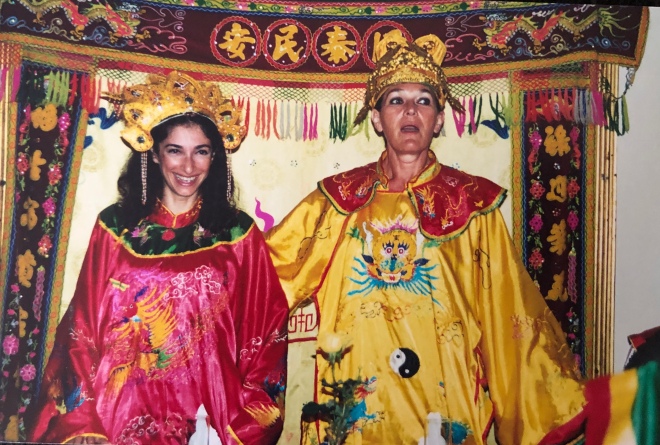 PPS: Actually this sojourn is among one of the most memorable I did with the girlfriends. Just like that, we all fell in love with this breathtaking country, the heartwarming hospitality of the Vietnamese people, a world class gastronomy… not to mention the diversity of the shopping that drove us crazy and resulted in serious overweight luggage on the return flights.

One thought on “The Night I Was Crowned Empress”